Yesterday was another busy day in the Rockport area.  I rode two ferries to cross the channel and I saw several gators. Wind replaced dense fog and dry cold replaced the warm and humid environment. My trike was completely dry unlike the prior day when it was covered with dew. I went back to Fulton Beach Road to photograph the same pier that I photographed the prior day. This time there were zero clouds but it was still a magnificent scene. I will try again later this morning. 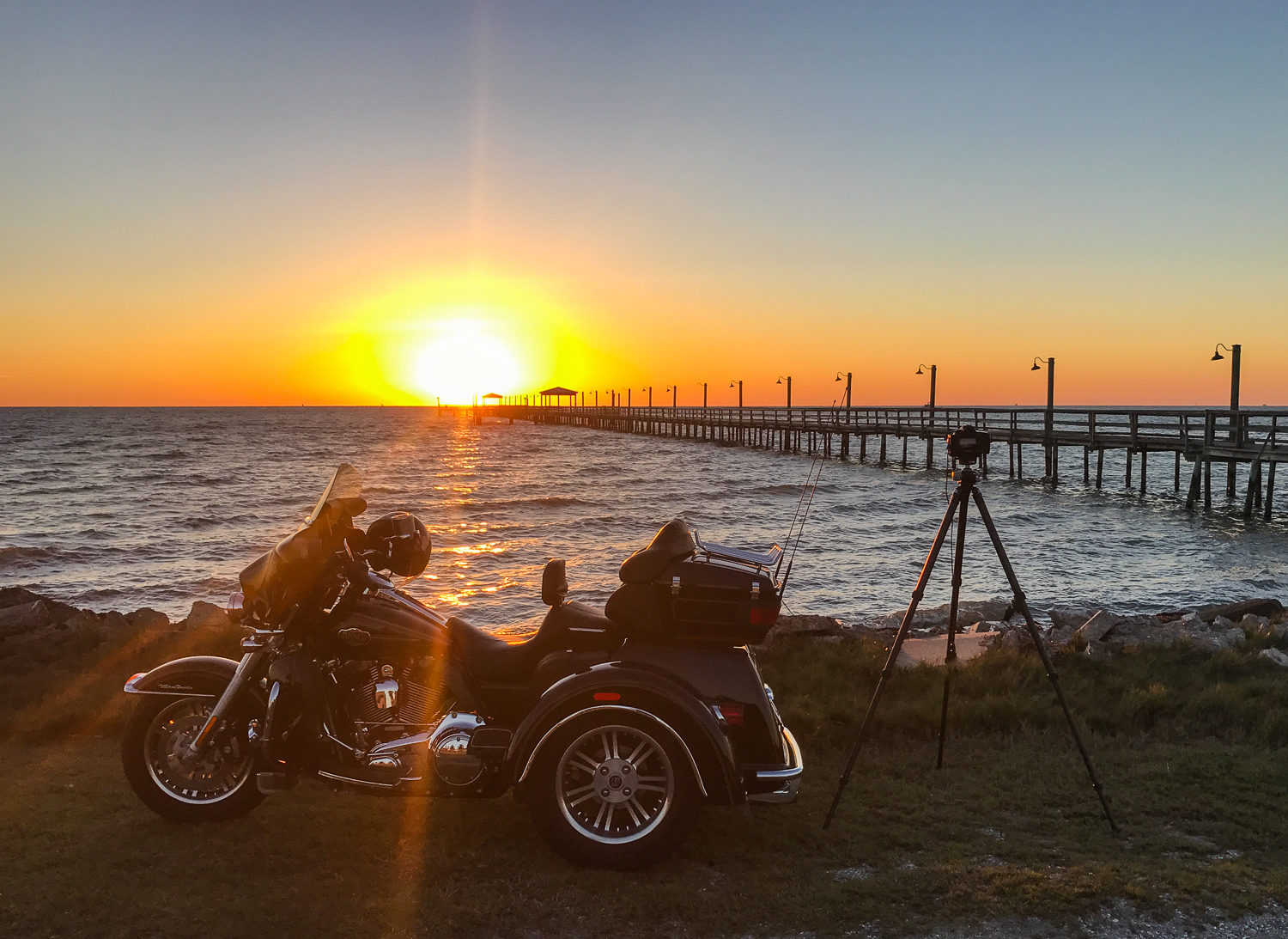 After photographing the sunrise, I went to The Daily Grind, the local coffee shop, to download my photos to my laptop and have a better cup of coffee than the one offered at the hotel. I then headed to Port Aransas to visit the Port Aransas Nature Preserve. I chose to take the shorter route which involved a ferry ride to and from the island. 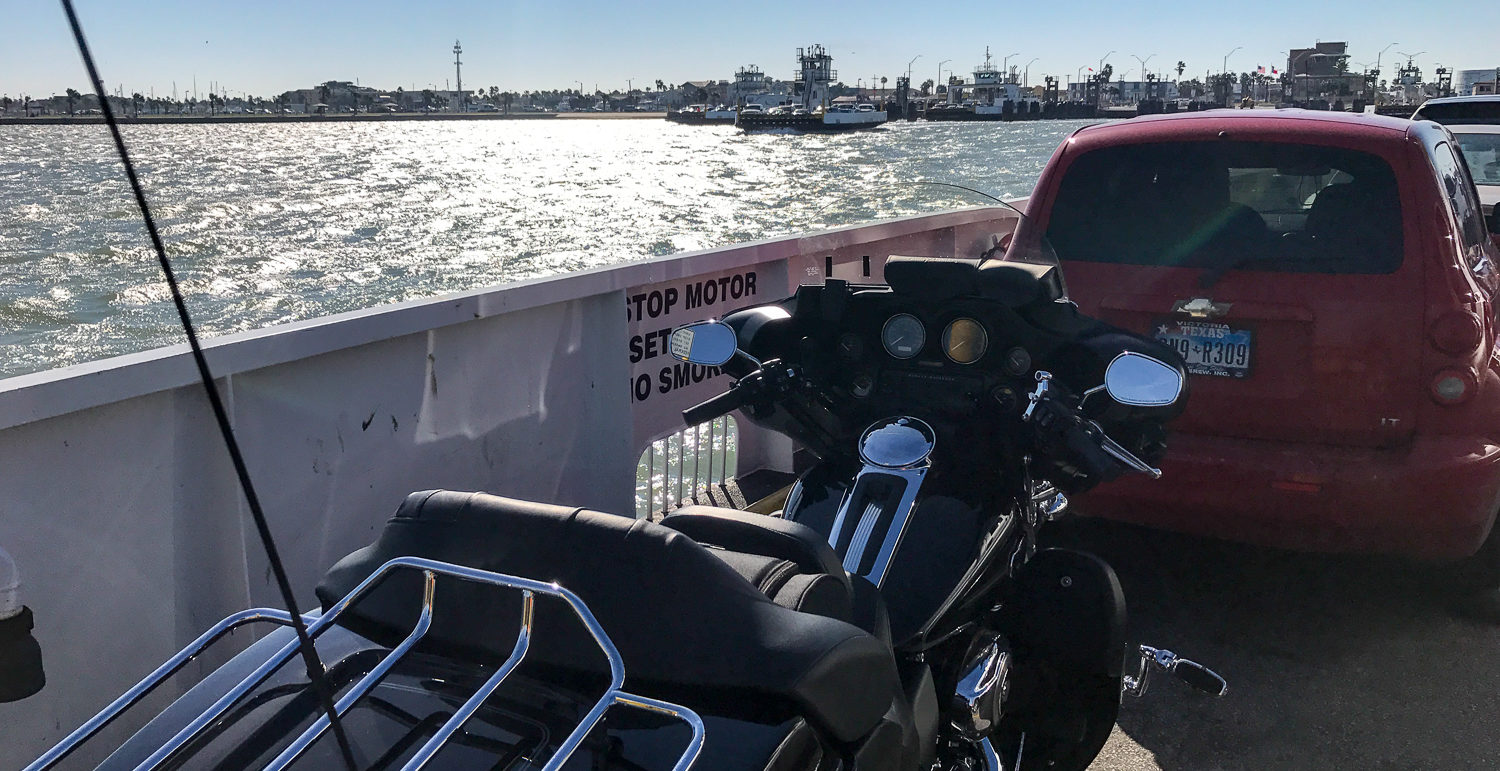 Ferry Ride Aboard the BL Deberry

Upon arriving at Port Aransas I first went to the Leonabelle Turnbull Birding Center. A short walk down a well made boardwalk yielded a view of two huge gators and hundreds of birds that were very close to the walkway. I had a great time photographing them. After checking out the birds at this and other locations I headed over to have lunch at Irie’s Island Food restaurant. It ranked 53rd on the “Yelp top 100” list. The place was packed.

I took another ferry ride over to the mainland. The wait for the ferry was very long. I think I waited 45 minutes or so. Not great while sitting on a trike in the wind but I wasn’t in a hurry. Once on the mainland I began scouting locations for the evening and morning photo shoots. I swung by the famous Rockport crab to see if perhaps it would yield a good photo and I crossed it off my list. 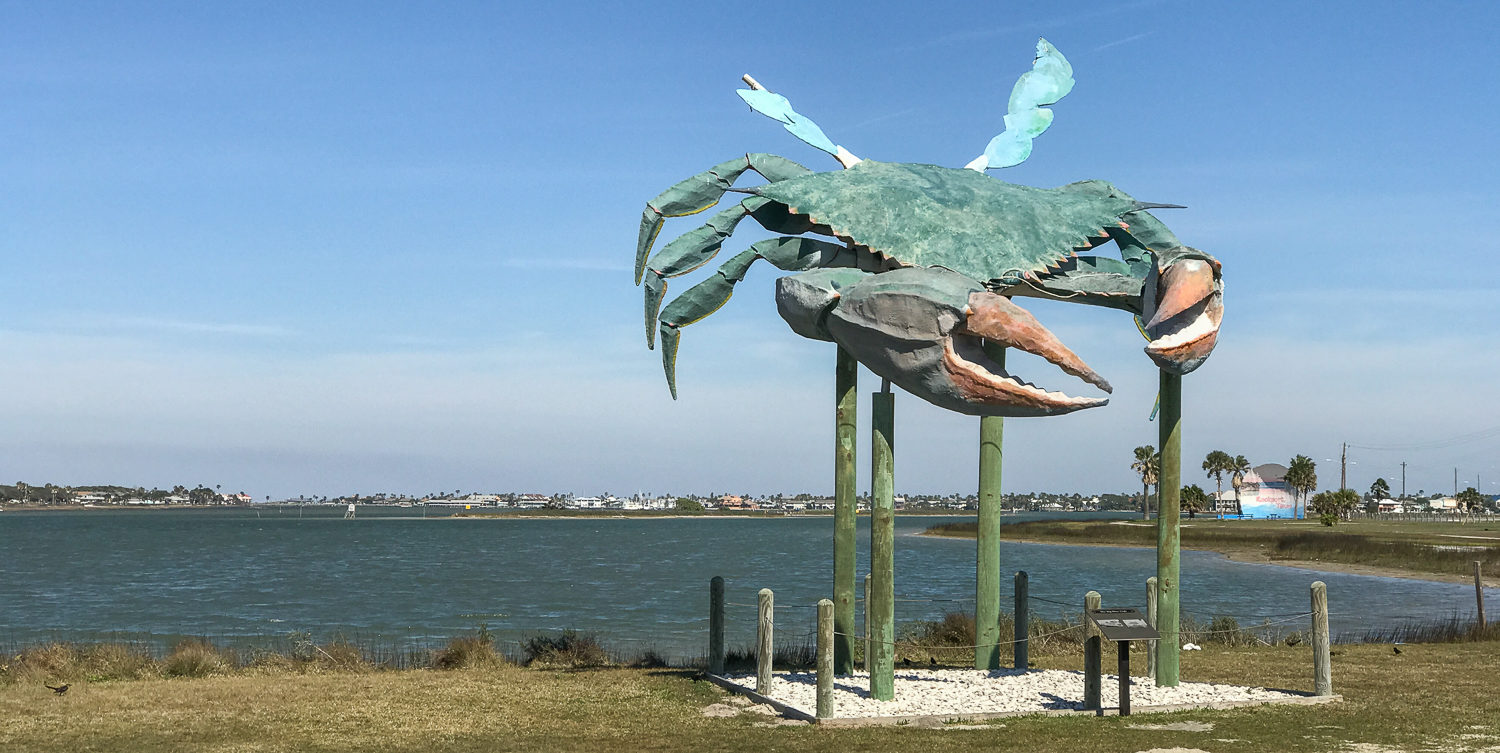 I wrote previously that Navy Pilots use the local municipal airport for training and practice. I noticed that two aircraft kept making touch-and-go’s and I decided to head over there to see if there was a good photo opportunity. I watched them come and go for about 20 minutes and they flew so close that I could photograph them clearly with my iPhone. I could not work them in to my sunset photo though.

I consulted one of the local photographers if there were other sunset locations in addition to Howard Murph Memorial Park and he said they were not any. All of the land along the Copano Bay area is private land so access is very restricted. So, Parked my “scooter” at Howard Murph Memorial Park and walked down the beach in an undeveloped area for about one-quarter of a mile before I found an old pier and an interesting dead bush. I had to walk in near waist-high tall grass which was a bit risky but I made it there and back without twisting or breaking anything.

I’m heading back home later this morning after a sunrise shot. I’m looking forward to processing the photos that I took and to posting them here in the days ahead.

All of these images were taken with my iPhone 7 Plus using its back dual camera. The camera was set on Normal mode with the aperture set at f/1.8 or f/2.8, shutter speeds between 1/150th of a second and 1/3500th of a second and the ISO set at 20. These are single images processed in Lightroom.