The Green River is a major tributary to the Colorado River. They meet in the Canyonlands National Park and become the Colorado River which feeds the Grand Canyon then runs south into the southwestern United States. Legislation creating the park was signed into law by President Lyndon B. Johnson in 1964. The Park was one of the first stops during my recent trip to Moab. We actually messed up. We were supposed to go shoot “The Needles” in the southern part of the park but I did not trust the GPS app and we ended up on the northern side. A friendly park ranger told us we were 100 miles off course and suggested the Green River Overlook. He said that this was the best place to see a sunset.

Upon arrival at the overlook parking lot, we noticed there was only one other vehicle. Next to it was a photographer setting up his gear.  We decided that more people would be arriving soon and that we did not want to shoot from the overlook itself. Instead we hiked out to a point where we could see a 180-degree view of the basin. The view was spectacular but it was a sheer drop-off. I estimated that it was 200 feet but my friend said it was more than that. So, we ignored the height and went about our business of shooting the fantastic sunset. This image was taken about 30 minutes before the sun cleared the horizon.

Upon returning to our vehicle, we noticed that there was a note on the windshield. It was from the photographer that we saw in the parking lot.  Apparently, we had taken up position directly between the overlook and the beautiful sunset.  At first we thought his note was a complaint but in fact he said that we made his photo more interesting. He sent us the photo below as a token of appreciation. That’s me crouching down on the right shooting a panorama. 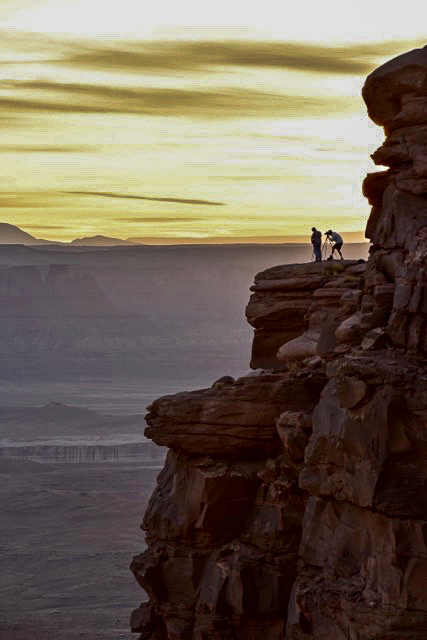 This image was taken with my Sony A7R using my Sony 24-70mm f/4 lens set on 26 mm. The camera was set on Manual mode with the aperture set at f/8, shutter speed at 1/320th of a second and the ISO at 100. I took a total of 7 photographs and stitched the panorama together in Photoshop. Final work was done in both Photoshop and Lightroom.